Authentic Autographs of The Beatles is the most south after piece of music memorabilia any fan or collector wishes to own.

Due to the rarity and value of these forgeries have been flooding the market scamming innocent buyers for many years. This is why we have set up this page to educated collectors and fans. What is best to buy and check the signatures of The Beatles for Authenticity of their autographs?

History of The Beatles

John Lennon, Paul McCartney, George Harrison, and Ringo Starr created the English musical group The Beatles in Liverpool in 1960. They are recognised as the most influential band of all time. Had a crucial role in the rise of the counterculture in the 1960s and the appreciation of popular music as an art form. With roots in skiffle, beat, and 1950s rock ‘n’ roll. The band later experimented with a variety of musical genres, including ballads, Indian music, psychedelia, and hard rock. They also blended elements of classical music and traditional pop into their distinctive sound. The Beatles revolutionised many facets of the music business as innovators in recording, song writing, and artistic presentation. They were also frequently hailed as the faces of the era’s youth and societal movements.

The Beatles, led by Lennon and McCartney, sprang from Lennon’s previous band. The Quarrymen, and established their reputation performing clubs in Liverpool and Hamburg over the course of three years starting in 1960. Initially, Stuart Sutcliffe played bass for the duo. Lennon, McCartney, and Harrison, the core group. have been performing together since 1958. Before inviting Starr to join them in 1962, they passed through a number of drummers, including Pete Best. After signing with EMI Records and scoring their first hit. “Love Me Do,” in late 1962, manager Brian Epstein moulded them into a professional group, and producer George Martin supervised and refined their records. substantially expanding their domestic success. The band was christened “the Fab Four” as their fame increased and “Beatlemania,” an intense fan frenzy, was coined.

The Beatles had attained previously unheard-of levels of critical acclaim and financial success by the beginning of 1964, making them global celebrities. They played a key role in Britain’s cultural renaissance, launching the British invasion of the American music market, and made their cinematic debut with A Hard Day’s Night shortly after (1964). The band stopped playing live shows in 1966 as a result of a growing desire to improve their studio work and the impracticality of their concert tours. The albums Rubber Soul (1965), Revolver (1966), and Sgt. Pepper’s Lonely Hearts Club Band (1967) were produced at this time, and The Beatles (commonly known as “the White Album,” 1968) and Abbey Road saw increased financial success (1969).

Their success ushered in the album era and made albums the preferred format for record consumption over singles. They also increased interest in psychedelic substances and Eastern spirituality among the general public and advanced the fields of electronic music, album art, and music videos. They established Apple Corps in 1968, a multi-faceted multimedia company that is now in charge of initiatives pertaining to the band’s history. All of the band’s original members found solo success after the group’s dissolution in 1970, and there have even been a few partial reunions. Harrison passed away from lung cancer in 2001, while Lennon was assassinated in 1980. McCartney and Starr continue to perform music.

With an estimated 600 million units sold globally, The Beatles are the most successful musical act of all time. They hold the record for the most number-one singles sold in the UK, the most number-one albums on the UK Albums List (15), and the most number-one hits on the Billboard Hot 100 chart (20). (21.9 million). The group won numerous honours, including fifteen Ivor Novello Awards, seven Grammy Awards, four Brit Awards, an Academy Award (for Best Original Song Score for the 1970 documentary Let It Be), and four Brit Awards. They were admitted to the Rock & Roll Hall of Fame in 1988, and between 1994 and 2015, each main member was admitted on their own. . 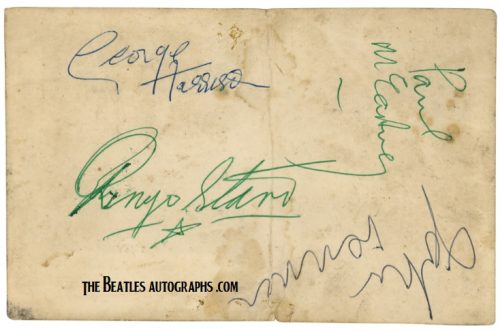 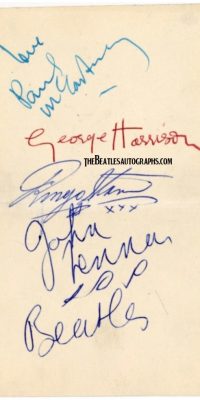 Signatures of The Beatles dating early 1963 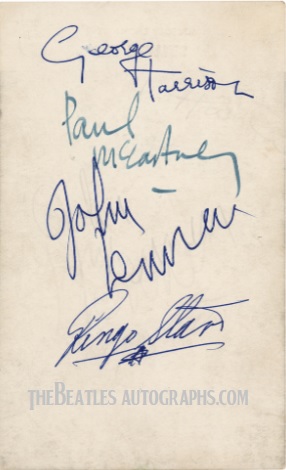